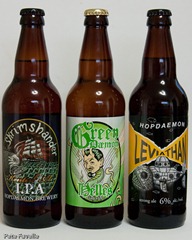 Today’s collection comes from Hopdaemon, a small brewery based in Kent. They’ve been on my ‘list’ for some time, but somehow I’d never managed to track them down before. Here we have all three of their beers that appear in bottle form – there are a couple of extras that are only available on tap.

I have to say, looking at the bottles side by side I’d have trouble telling that they were from the same brewery; also the label style somehow manages to re-enforce my assumption, from the ‘Hopdaemon’ name and even the Kiwi founder, that these are going to be big, floral, hoppy beasts and about the last thing expected were some very traditionally styled Kentish ales.

Just goes to show how wrong first impressions can be! Scrimshander is a copper coloured IPA at 4.5%. It has a fine bubbled lingering head which leads into a nice body with a well controlled fizz, and there’s not much nose to it – just a hint of caramel. On the tongue there’s sweet, fairly light malt, with deep hoppy bitterness that lingers long into the finish. It’s quite a classic Kentish bitter, and I like it, but it’s somehow not what I was expecting. 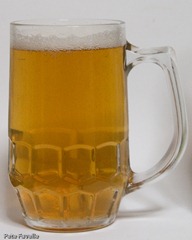 Green Daemon Helles is a slightly stronger golden beer, at 5.0%. A straw colour, with a similarly lingering head on it. There’s more to smell on this, with some distinct floral grapefruit notes. It has another good dose of bitterness, although less pronounced than with the Scrimshander. A light body, gently sweet on the tongue, and very drinkable with pale fruit flavours throughout – delicious! 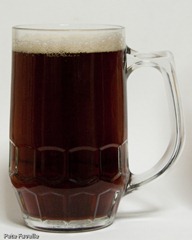 Lastly we come to Leviathan, a strong ale at 6.0%. A deep red brown in the glass, with a slightly thinner head than it’s stable mates. On the nose there’s dark fruit, treacly, like dates. Surprisingly for it’s strength and sweetness, it doesn’t have a massively big body but it’s wonderfully sweet, sticky and rich, with some bitterness to the end that balances out that sweetness nicely. It’s a great tasting dark beer, with syrupy dried fruit – very nice.

Overall, it’s a great collection of traditional, very tasty Kentish beer – not what I was expecting, but very nice nonetheless. I shall certainly keep an eye out for their cask-only offerings.