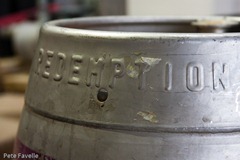 After a year of doing my brewery tours at home, it seems about time that I got off the sofa and did a tour of an actual brewery.

Redemption, based in Tottenham, has the dual benefits of being a fantastic brewery and within a few miles of home, so where better to go?!

I first encountered Redemption last year, when I was invited by a friend to join a CAMRA visit to the brewery. I hadn’t really appreciated until then just how much the London brewing scene was exploding, and I leapt at the chance to see what was, at that stage, my closest brewery – a title which has now passed to The Bull in Highgate, until I can persuade Kavey to let me open the Barnet Brewing Company!

I popped back for a second visit more recently, this time with Kavey in tow; partly for a more extended chat, but also as an excuse to sample some more of their excellent beer and take some more pictures. 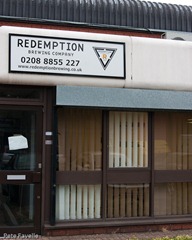 Located in a small industrial park in the back streets of Tottenham, Redemption is a fairly unassuming establishment from the outside – the first time I visited I wasn’t sure we were in the right place; it didn’t look like any brewery I’d visited before.

Once inside, the wonderful beery, malty, hoppy smell of a brewery hits you, along with the warm welcome that the ever-friendly Andy Moffat, owner and brewer, extends.

Andy is an inspiring character – I imagine he’s not the only man to have dreamed of opening a brewery (or is that just me and him?) but rather than just dreaming he left his city banking job and in 2010, with no commercial brewing experience, founded Redemption. Since then, he’s been brewing wonderful beer as fast as he can sell it. 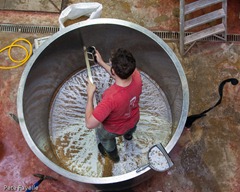 It’s a small plant – 12 barrel capacity, or “big enough to climb in and clean” with enough fermentation and conditioning tanks to maintain a good range of 4 or 5 beers available at any one time. Sadly that means I probably can’t persuade him to brew the Fellowship Porter year round, but that’s not too big a price to pay as it means there’s 4 or 5 other great beers to enjoy instead. 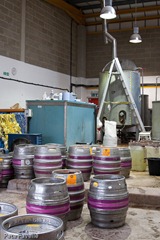 The backbone of the range is their Pale Ale, a floral hoppy, sweet 3.8% golden ale; and Urban Dusk, a darker, sweeter, altogether ‘bigger’ 4.6% bitter with more malt to it. My personal favourite is probably the Fellowship Porter, deep, dark at 5.1% with wonderful, rich coffee overtones – not only on the nose but also, unusually, carrying over into the taste – but now I’ve said that, I feel bad to have left out Trinity, a much lighter, summer ale at 3.0% which goes down with dangerous ease.

I’m afraid I don’t have any pictures for you; every time I find any of their beers on tap the evening ends up lasting longer than intended and my photographing skills become rapidly … blurry. My tasting notes become even less readable than normal and the drunkenly scribbled “yummm!” notes end up beer stained.

Suffice to say, I am always thrilled to see their beer on tap (despite the impending hangover that usually indicates). 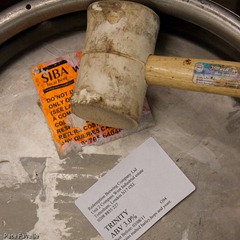 The fantastic news is that Redemption will finally be arriving in bottles next month, which means I’ll soon be able to stop cursing my useless local pubs for not stocking them, and keep an emergency supply of their beer in my cupboard (right next to my other London staples, Kernel’s IPA Citra and Windsor & Eton’s Windsor Knot).

I was lucky enough to get a couple of test bottlings of the Pale Ale and it’s as magnificent in the bottle as it is in the cask – sweet, gentle hoppy bitterness with light fruity floral notes and an impressively ‘cask-like’ carbonation. I also managed to snag one of their collaborations with Kernel, which manages to blend their two styles magnificently – the heavy, somehow ‘oily’ hop punch from Kernel but moderated by Redemption’s easier-drinking style. I’m kicking myself that I didn’t manage to get more of it. 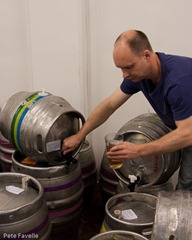 That collaboration highlights one of the things I love about the crop of new London breweries – there’s never a sense of competition between them. It’s more like they’re siblings than competitors; yes they try and outshine each other but they’re always supportive, respectful and often in each other’s breweries cooking up something special and wonderful for those of us lucky enough to get hold of the results.

I’ll leave the last words to Andy; apologies for the occasionally terrible camera work. In my defence, he did pour me a generous glass of Pale Ale before we started and it would have been rude to let it go warm during the interview!

Redemption beer can be found around (especially North) London pubs who are sensible enough to stock them, beer festivals smart enough to order them, and occasionally elsewhere if you’re super lucky. Also bottles from next month – hopefully from at least one of my regular online suppliers. If your local doesn’t stock it, tell them to contact Andy!