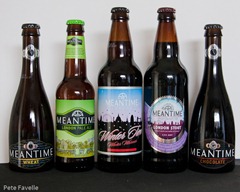 Meantime are one of those breweries with such an impressive range of beers that it’s hard to do justice to the whole lot in one go. I’ve previously tasted a couple of their offers back when they launched their London Lager; today I’m going through the bottles I’ve picked up recently but this doesn’t represent everything this London brewer has to offer! 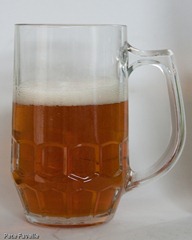 So, first up is London Pale Ale, at 4.3%. Golden amber in the glass, with a fairly loose, short lived head and quite a high level of carbonation bubbles. It has a sweet, gently hoppy, green nose and that sweetness remains on tasting. It’s a little over fizzed in the mouth, and I find that same tang that I get from fizzy water – maybe an artifact of the carbonation? The hoppy bitterness is there but I’m not getting the more floral, citrus notes that I’m expecting from the nose. It’s a perfectly drinkable beer, especially on a hot sunny afternoon like today, but it’s unremarkable. 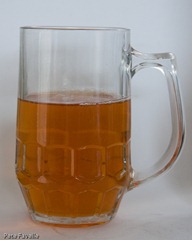 Next we have Meantime Wheat, slightly stronger at 5.0%. A surprisingly similar colour to the London Pale Ale – I’d have expected a wheat beer to be paler – with virtually no head on it. It smells much more like a wheat beer than I’m expecting – that Hoegaarden smell – with toffeeish notes, and you can almost smell the alcohol too. Those toffee, almost treacle hints are in the flavour too along with a sharpness that makes me think of grapefruit juice – it almost makes me wonder if it’s slightly gone off. I’ve got months left on the best before date though, so maybe this is how it’s supposed to taste. I’m not convinced by this one.

I’d like to apologise for the pictures from here on; I honestly hadn’t over-enjoyed my work, I just seem to have changed the settings on my camera and didn’t notice until I came to process them. I was tempted to go and buy more just for the photos, but I have so much beer at the moment that it would probably be a Bad Idea. 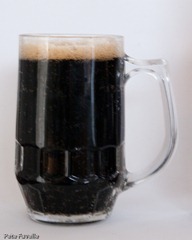 London Stout is next, at 4.5%. Pouring deep, dark reddish brown with a fairly generous, open tan head and a roasted malt and chocolate nose. A good, full body in the mouth, creamy or even almost foamy, sweet dark caramel with just enough of a bitter hint to pull that sweetness back. Surprisingly refreshing for such a dark beer and very, very drinkable. 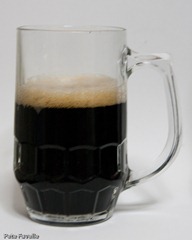 Chocolate, the strongest of this batch at 6.5%, is the second of those distinctive ‘bell shaped’ bottles that Meantime use for some of their beer. Black in the glass, with a thin tan head, and the smell of sweet malt and dark fruits. On tasting, the warmth of the alcohol is apparent, along with sweet molasses – there’s something almost port-like about it. Personally, I didn’t get much of a chocolate hint either from the smell or the taste which is slightly curious. However, that doesn’t mean this wasn’t a great beer! 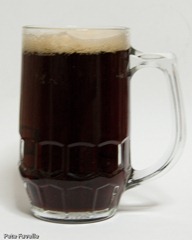 Finally, the Winter Time Winter Warmer, at 5.4% and possibly the most inappropriate beer to be enjoying on a hot August evening. A dark reddish brown, with a lingering whitish head. Rich, roasted malts, a hint of coffee and caramel and a great bitterness running throughout (I also have ‘chocolate biscuit’ scrawled at the bottom of my notes, although it’s not clear whether that’s a tasting note or the start of a shopping list). It’s not too heavy, and considering how nicely it goes down in the heat of summer I can only imagine how great it would be sat looking out at the snow.

I personally think that Meantime are much stronger when they’re doing their dark porters and stouts; they’re big and bold, dark and sweet but always distinctive. In fact, their London Porter is often the first beer I reach for when I’m cooking something that needs a good dark beer in it (although to be fair that’s partly because it comes in a big bottle and I get to drink the rest while I’m cooking).

One thing I noticed running through a few of the beers was a slightly metallic tang; that ‘fizzy water’ tang I mentioned in the London Pale Ale. I’m not alone either; I’ve seen it mentioned in reviews of various of their beers elsewhere – I wonder if it’s an aspect of the mineral content of their water supply or something?

At least some of these beers – I forget precisely which ones! – have been kindly provided to me.