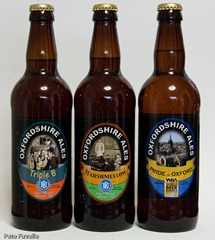 Continuing my journey through my last box of goodies from AlesByMail, we reach Oxfordshire Ales – a microbrewery based in the wonderfully named village of Marsh Gibbon. They produce a fairly small range of traditional ales, and here we have their entire bottled range. 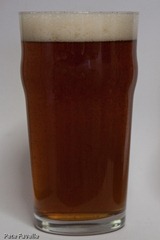 First up is Triple B, a 3.7% session beer. A deep amber colour, with a fine-bubbled, velvety-looking lingering head. In the glass I can see a huge volume of rising bubble streams; it looks more like a champagne than a real ale!

There’s not much on the nose; a hint of sweet, lightly toasted malt but not he “full well hopped aroma” the bottle suggests. That lingering head feels almost like the froth on a latte in the mouth; those bubbles don’t translate into an unpleasantly excessive fizz. It’s a nice, medium-to-light bodied beer, gentle malt at first and a very subtle hoppy tang towards the end.

It’s hard to say much more about this one; it doesn’t stand out particularly; the flavours are subtle to the point of being obscure. That said, you don’t want a session beer that overwhelms your senses. It’s on the edge of bland, but it’s a good, if unremarkable, ale. 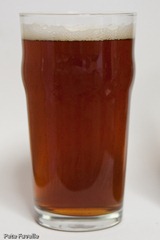 Next is Marshmellow, stronger at 4.7% and a slightly deeper amber than the Triple B. The head has a similar velvet appearance, but is much thinner in the glass. The aroma is much more pronounced, with dark cherry fruit.

It’s another smooth beer in the mouth, a slight sweetness on the front with a hoppy bitter undercurrent, leading through to a more obvious bitter tail and right at the end there’s an aftertaste of .. something dry, green, sharp. Watermelon?

You can tell that it’s a stronger beer; in many ways it tastes and smells stronger than the bottle suggests. An enjoyable bottle. 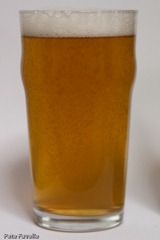 Finally, Pride of Oxford, a 5.0% pale golden ale. Another lingering, velvety head, with an incredibly floral, sweet lemon nose. That sweetness and those lemon flavours come through on tasting too, along with a lot of floral hoppiness and subtle lingering bitterness.

It’s a very drinkable, golden pale ale. As with the Triple B, there’s nothing that really stands out about it but it’s a perfectly drinkable pint.

Really intrigued by the Marshmellow with the cherry note, will give this one a try!