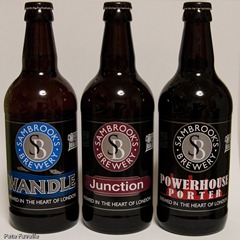 Today, I get to continue my mission to sample all the beer brewed in London, this time with Sambrook’s Brewery. Based in Battersea, they’ve been brewing since 2008 in both draft and bottled form and, as we shall see, they certainly know a thing or two about great beer! 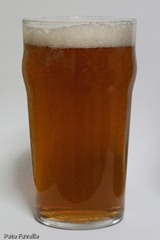 We start with Wandle, a 4.2% golden ale (3.8% on draft) named after one of the many tributaries to the Thames. There are some pretty big bubbles lurking (you can see them all clinging to the side of the glass, above) and the head is very open, and short lived too. It has an impressively malty nose for such a light coloured beer, and there’s some fairly light, fruity hop notes too. On tasting, there’s more of those gentle malt flavours, with a subtle but distinct undercurrent of hops right the way through and a distinct sweetness there too. Despite a slight exuberance of bubbles, it has a pleasant enough mouthfeel, and goes down very easily. It’s a nice session beer, if a little on the gassy side. 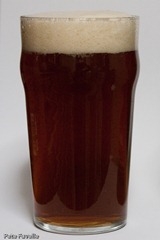 Next up is Junction, at 4.5%. This is a darker golden beer, with finer bubbles and a more lingering head. It’s another beer with a tempting malty nose, with a woody hoppiness present too. It’s a better balanced beer than Wandle, the sweetness is – not less pronounced, it’s almost stickily sweet, but it’s somehow not so “in your face” – and works better with the bitterness of the hops towards the end. The finer bubbles lead to a finer, more satisfying body, and there’s a some dark fruit flavours there too. Again, goes down very easily and quickly (and it’s more than half gone before I’ve even finished this paragraph).

Lastly, Powerhouse Porter is a dark, rich looking 5% porter; deep, deep brown with an open, fairly short lived head. Not big on the nose, but in the mouth there’s a rich, sweet dark malt – almost that black treacle bitterness, sweet but without being sticky. There’s some other sweet notes – the best I can do is milk chocolate toffee – after the burst of bubbles in your mouth fade and before the lingering bitterness clears away the sweetness. It’s a nice, medium body – lighter than you might expect from the colour. It’s delicious; not hugely complex but just very, very nice.

Overall, I’m a big fan of Sambrook’s. My tasting notes for all three bottles say basically the same thing – delicious, easy drinking, where’s my beer gone? They’re a worthy addition to my list of London breweries whose bottles I want to be keeping in permanent stock!

They’re a brewery that I’ve managed to find several times on tap (primarily Wandle) and that’s the best way to sample their beers. If you don’t get lucky and find them in your local, I got this collection from one of my usual online beer suppliers, Ales By Mail.

Like the idea of Junction, in fact, I'll be ordering some to taste. Makes a change from Chocolate Stout. Wonder if Ales by Mail will have a blueberry bitter which I tried once but never spotted again?~E~

Love these beer reviews, will have to check out that Porter sounds lush!