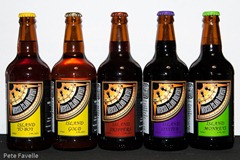 I must confess that in the end I didn’t try their wines (they only produce whites and I’m more of a red man) but I did bring home a full set of their bottle conditioned ales to try – and I’m very glad I did! 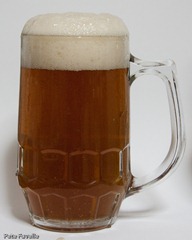 Island Yo Boy (well, it is an Essex brewery after all!) is a 3.9% golden bitter ale. It pours as a nice light amber, clear (except when you eagerly pour all the yeast into the glass as I did in the picture!) with a generous, open head that lingers fairly well. There are nice floral hops on the nose, and a nice medium body. There’s a surprising amount of fizz, light on the malt but with a really tasty balance of bitter and aromatic hops. A light, easy drinking session ale – very tasty, and a great start to the evening! 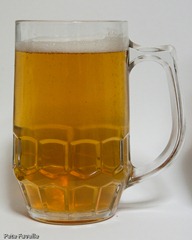 Next is Island Gold, a 4.5% beer made with lager malt and hops. A pale gold colour, with a less pronounced head on it. There is very little smell to it, just a hint of sweetness and light fruits, almost grape-like. It has a similarly understated taste, with a gentle but surprisingly deep malt flavour, light on the bitterness and more of that green fruitiness. Again lots of fizz but that’s more to be expected with this one; it’s an interesting lager-style beer with a little more flavour to it than you might expect. Not my normal beer drinking cup of tea but it’s a good example of the style. 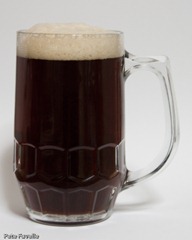 Island Skippers is a 4.8% Best Bitter; a nice reddish brown in the glass with another generous and open head on pouring. It has a delicious malty nose with milk chocolate and just a hint of coffee roasting; it smells darker than it looks. There is a wonderful smooth mouth feel, a generous body, buckets of malt and a nice undercurrent of hoppy bitterness. Another great beer that hits the spot. 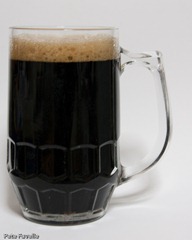 Next is Island Oysters, at 5.1% – the first of two properly dark beers. Pouring such a dark brown as to be almost black, it has a generous if slightly short lived rich brown head on it. On the nose, rich dark chocolate and black coffee. In the mouth, a bold, full body, sweet without being sticky. Distinctly chocolatey, with little bitterness coming through. Deliciously drinkable. 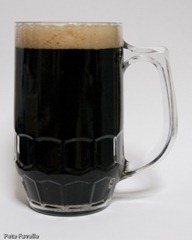 And so, finally, to Island Monkeys, at 4.5%. Still dark, although marginally less so than the Oysters and with a finer textured, more lingering tan coloured head. There’s a generous amount of chocolate and liquorice on the nose. It still has a firm body but is lighter than the Oysters; dark malt and black treacle flavours but not hugely sweet. Bitterness is much more pronounced this time, with a slightly peculiar bitter aftertaste which spoils it a little. Nice, but not their best.

Overall, a very tasty collection of beers with Skippers and Oysters both deserving of a special mention. I haven’t seen the brewery listed on the usual online suppliers, so your best bet is either to get lucky and find them in your local, or order direct from the brewery itself.