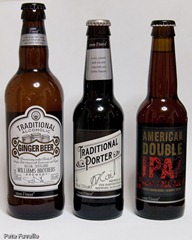 Supermarkets have been selling ‘own label’ products forever. Beer is no exception – I’ve reviewed Aldi’s Finchley’s Ales IPA previously here, and I’ve got another of their bottles lurking downstairs in my “to be reviewed” pile. Usually, the actual producers of these own label products are fairly obscure; although it’s suspected that Aldi use Bateman’s for their beer, it’s not mentioned on the bottle – that guess is largely based on the bottle shape!

Tesco have taken a different approach with their ‘Finest’ range, and named the breweries that they have worked with. At first I imagined that they’d approached these producers to come up with something just for Tesco, but it actually looks like in each case they’ve just changed the name of one of their existing brews a little and slapped a new label on – it’s a little disappointing, but I suppose I can understand that it’s a lot easier for the breweries to take this approach.

Finding a 3 for £4 deal (now sadly expired) I snapped up the three different Tesco Finest beers on the shelves at my local branch, and brought them home to sample. 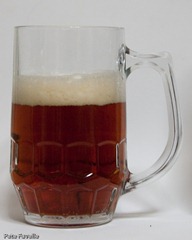 Starting with the American Double IPA (9.2%), produced by those crazy people at Brewdog – and likely to be a badged version of their Hardcore IPA. A crystal clear, deep golden beer with a lingering foam, it’s actually so full of hops that I’m pretty sure I found a petal or two floating in the glass. Buckets and buckets of sweet, flowery citrus hops on the nose and a real undertone of alcohol fumes. The taste is, if anything, even more full of bitter citrus hops than the smell, but the alcohol punches through even more strongly. It’s almost a great beer but the balance is somehow off – the big hitting hops clash with the equally hard hitting alcohol and it’s just too much. A big strong beer like this can be a wonderful thing, but this somehow doesn’t quite pull it off – I’m a little disappointed. Next up, Traditional Porter (6%) from the Harviestoun Brewery, which is actually their Old Engine Oil. A black brew with a thin, fine bubbled head and a rich chocolate smell, which combines with bitter coffee notes on tasting, it’s rich, sweet and deeply flavoured and is a wonderful tasting porter. Excellent work and comfortably the best beer of the set. 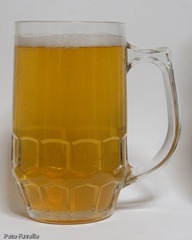 Lastly, Traditional Alcoholic Ginger Beer (3.8%) from Williams Brothers Brewery. Pouring light straw coloured, with very little head, it looks more like a fizzy drink than a beer. Ginger is the overwhelming smell you get, but it still tastes of actual beer on drinking. The heat from the ginger is very much in evidence, although the taste is not so obvious – it’s a very light tasting beer, with a citrus lemon sharpness and a lot of artificial fizz. It’s not a bad ginger beer, but it’s not remarkable.

Overall, a bit of a mixed bag, and no more successful than if I’d just walked in and grabbed three bottles off the shelves at random – I’m not convinced that the ‘Finest’ label makes much sense here. That said, it’s certainly exposed me to some new breweries and Harviestoun is definitely getting added to my BTAH (Brewery Tour At Home) list!