Regular readers will be familiar with my constantly banging on about bottle conditioned beer. I’ve always believed that beer is a living product and even when bottled should be as close as possible to it’s real, cask-conditioned brother and the only way to do that is to leave the yeast in, to finish that secondary fermentation right in the bottle. I know I’m not alone in this belief – even CAMRA have a whole ‘Real Ale in a Bottle’ campaign.

It has been a long running mystery to me why any brewery, which is presumably run by beer loving folk, would spoil their beer by bottling it all filtered and killed and artificially carbonated instead of leaving a little yeast in and delivering their product as nature intended. One of my favourite breweries – Hogs Back (watch this space for a Brewery Tour At Home, I have a bag full of their bottles downstairs!) – has always produced proper, bottle conditioned beers but recently a lot of their bottles have switched to what they rather intriguingly call “brewery conditioned”. That’s another way of saying “not bottle conditioned” and after some googling – as well as chatting with them when I was down that way replenishing supplies – it turns out that it’s something that has been forced on them by their success.

You see, as they’ve grown they’ve managed to get listed in supermarkets. Occasionally, customers of those supermarkets take one of these bottles of carefully crafted, bottle-conditioned beers and, despite all the writing on the side explaining that there’s sediment and if you don’t want it in your glass then you should pour it carefully, end up taking it back to the supermarket and complaining that “it’s all cloudy”. To me, this is the beer drinking equivalent of sending back your gazpacho soup because it’s cold, but the supermarket, instead of saying “well of course it is, didn’t you read the damn bottle” not only take it back, but then send the whole batch to the poor brewery with a big bill attached.

Hogs Back have, quite reasonably, taken the view that they simply can’t afford to keep doing this and have (reluctantly, I get the impression) moved away from bottle conditioning to cater to this rather more fussy market. They say that it’s “the same great taste as the originals” and for what it’s worth, they’ve done a stunning good job – I hadn’t even noticed that the last crate of Gardener’s Tipple I bought was no longer bottle conditioned, which is saying a lot. But I was still curious as to how much difference it really makes. 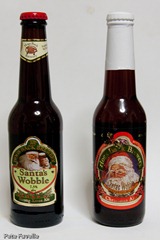 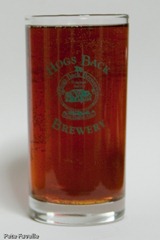 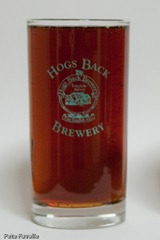 So then, Santa’s Wobble is a 7.5% Christmas Ale; the bottle on the right is bottle conditioned. The one of the left is not. And yes, I’m enough of a fan to possess branded glassware.

As expected, they are very similar in look; no head, deep rich amber colour but not as dark as I was expecting from such a beer, somehow. Not much on the nose, some rich dark fruit which is more subtle on the bottle conditioned one. There are more obvious ‘fizzy’ bubbles on the side of the glass from the carbonation of the non-conditioned beer.

On tasting, the fizzy bubbles are again apparent from non-conditioned beer; there is a little air in the bottle conditioned version but it’s virtually flat. Aside from the bubbles, they are very, very close in taste. Rich, sweet, alcohol-soaked fruit and filled with malt – the flavours are more distinct in the bottle conditioned version without the distraction from the fizz but it’s a marginal thing. There’s a gentle alcohol tang, and a short lived but appealing bitterness to the end.

CAMRA know what they’re talking about. Beer isn’t “Real Ale” once it’s been killed, and I personally think it’s absurd that breweries are forced down this route by what is, ultimately, a problem of consumer education and not a flaw in the product. But if a brewery really knows what it’s doing, it seems to be perfectly possible to produce a yeast-free bottled beer that, if not quite as good as the real thing, comes damn close.

Interesting post – and it highlights the problem of success for so many producers, ending up in them having to change or even reduce and homogenise their product. Always a shame to see (and I'm really looking at you Stilton cheese). What's encouraging here is that the brewery are finding a way round the issue that maintains something close to the original in quality and is als attractive to the mass market.

Never really thought about that at all. Will be keeping eyes open for bottle conditioned beers now!

ruthj: thanks!Grubworm: It's frustrating, because there's nothing wrong with the original – it's a shame that rather than trying to educate the customer, supermarkets make it the supplier's problem.Julianna: Just remember to pour it gently and not take it back if it turns out cloudy! Actually, I like the slight yeasty 'tang' you get when you bring some of the yeast over from the bottle. A lot of the bottle conditioned ones will have the “CAMRA Says This Is Real Ale!” logo on it somewhere…

You should do a double-blind taste test to see how well you can tell the difference between the two (and which you actually prefer). If they are this close it might be interesting. Sort of like the Pepsi vs. Coke tests where people who swear they prefer brand X find out they cant reliably tell the difference?

I think that would be great fun – however it's very hard to find the same beer in both forms (which is why I was so glad to find this one!).